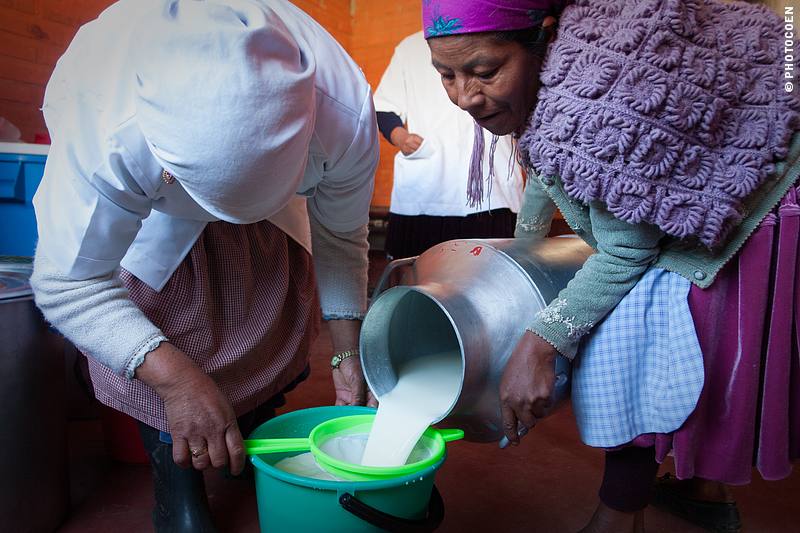 During Coen’s photography assignment for Bevrijde Wereld (meanwhile called Solidagro and locally called Mundo Nuevo), a Belgian NGO that supports agricultural projects with the emphasis on food safety, we visited a project focusing on women empowerment:

INCCA is one of Bevrijde Wereld’s partner organizations in Bolivia and the yoghurt factory was one of their successful projects. Soon after the start of the yoghurt factory, the women were given the opportunity to sell yoghurt to schools in Tiraque (near Cochabamba), where it would be part of the school breakfast, which meant a weekly production of 14,000 bags with 100 mls of yoghurt.

How did they manage?

The Construction of a Yoghurt Factory

With the help of INCCA and Bevrijde Wereld local women from Koari constructed a production center with a kitchen, office and storage space. They bought pans, a stove, thermometers and a fridge. They were able to get technical help from the University of Cochabamba (UMSS), which taught them how to produce yoghurt. Doña Vitalia and Doña Elsa became the managers of the factory.

Just after I arrived early one morning, Doña Edelfrida entered the factory. Together with some 20 other families, she is one of the regular suppliers of milk to the factory. I couldn’t believe she had just walked five kilometers with a milk canister filled with forty liters of milk on her back.

“Yes, it is heavy, but most of the time there are no taxis or buses so I have to walk,” she says, shrugging her shoulders that are now blissfully free of the weight.

Doña Vitalia’s job is to take a sample as soon as the milk is delivered. A spoonful of milk is mixed with a splash of 96% alcohol. If the mixture remains clear, the milk is good to use, but if the two substances separate, it can’t be used to make yoghurt (but instead for example for cheese).

“We only worked in our own homes and didn’t know anything,” Doña Vitalia told me. “Now I have to go to the town hall every two months to pick up a check and go to the bank to deposit money or get money in order to pay the women farmers for their milk. I’m learning new things all the time.

Doña Elsa and I are even going to do a management course. Ha! me, studying management. Who would have thought that!” she exclaimed. She sounded as if she still didn’t believe what was happening.

With Gonzalo, a representative of the local NGO, I spoke about women empowerment. “Thanks to the foundations of women organizations in villages and these kinds of initiatives men are starting to listen to the women in their community. That was never the case,” he said.

I asked him about plans for the future. They were ambitious.

“Today the factory produces yoghurt two days a week but we hope to increase that to five days a week by selling yoghurt to other schools as well.”

One of the major achievements of the factory was finding an investor to help them buy a machine to fill the bags with yoghurt. Until then that was done manually. Gonzalo helped them calculate their profits and keep money apart for investments such a machine, or a pick-up truck so milk can be picked up from the farms and women like Doña Edelfrida no longer have to walk so far anymore.

Sharing Food & a Curiosity to Learn

While we were having these discussions fresh milk was heating up. Before it had reached the necessary 80 degrees there was time for lunch. The five women working that day had brought a bowl with food to share with their colleagues: potatoes, boiled eggs and corn – their staple food. They put their bowls on the floor and we sat around them, picking what we wanted from a bowl with our fingers. My contribution was broccoli and I had no idea whether they would appreciate it.

However, they looked at it with curiosity.

They carefully took a bite and the bowl was empty in no time.

I was proud of what I saw: a fantastic group of women achieving this in a society that is still largely ruled by men. They set up a factory, manage it, make a profit and from the simple gesture of trying a to them unknown vegetable like broccoli that sense of curiosity and willingness to take risks was confirmed in a beautiful way. I love these moments of companionship, of sharing time with women.

2 thoughts on “Women Empowerment in Bolivia – a Yoghurt Factory”